NATO is not particularly good when it comes to countering new threats. The most successful alliance in military history has not as yet managed to develop a strategy designed to deal with the battle for resources, asymmetrical conflicts, cyber warfare and the security policy consequences of climate change. NATO found it difficult to come to terms with the disappearance of enemy stereotypes at the end of the east-west conflict, and the "war on terror" is proving to be tough going.

Thus what NATO needs to do is to redefine its mission. Does it want to be a purely defensive alliance, or does it want to be a military reserve force at the disposal of the United Nations? Should it intervene whenever Western values are under threat?

Theo Sommer, one of Germany's most renowned journalists, comes up with some thought-provoking answers. He believes that the alliance needs to be more political and more European, that the military wing should be downsized, and that NATO will gain nothing by overextending itself in an effort to become a globally active organization. However, he is of the opinion that it has a future as an alliance in which Europe and America agree to cooperate as equal partners.

Atributos LU
Año de Edición
2013
Tipo
eBook
Autor
Theo Sommer, Alfred Clayton
Subtítulo
We Need a More European Alliance
ISXN
9783896843784
Idioma
Inglés
Núm. Páginas
130
Peso (Físico)
0
Tamaño Archivo (Virtual)
1.96
DRM (Virtual)
Sí
Formato Electrónico (Virtual)
EPUB
Título
NATO No Longer Fits The Bill
Biografía del Autor
<p>Theo Sommer is editor-at-large of the weekly newspaper DIE ZEIT. He gained a PhD in history, began his career as a journalist in 1952, and has been with DIE ZEIT since 1958. He was its editor-in-chief from 1973 to 1992, and together with Marion Gr&auml;fin D&ouml;nhoff and Helmut Schmidt one of its publishers until April 2000. He is primarily interested in foreign policy and defence topics. In 1969-70 he was head of the planning staff at the West German Ministry of Defence under Helmut Schmidt, and in 1970-1972 and 1999-2001 served as a member of the German government\'s Defence Structure Commission.</p> 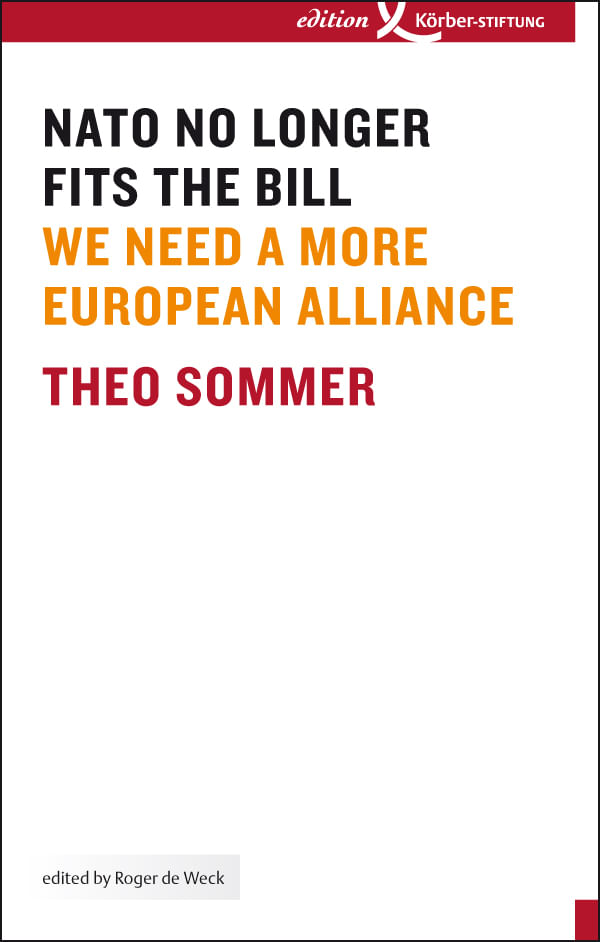