This carefully crafted ebook: "The Ethics of Immanuel Kant: Metaphysics of Morals - Philosophy of Law & The Doctrine of Virtue + Perpetual Peace + The Critique of Practical Reason: Theory of Moral Reasoning" is formatted for your eReader with a functional and detailed table of contents.
Fundamental Principles of the Metaphysics of Morals, also known as the Groundwork of the Metaphysic of Morals, is the first of Immanuel Kant's mature works on moral philosophy and remains one of the most influential in the field. Kant conceives his investigation as a work of foundational ethics?one that clears the ground for future research by explaining the core concepts and principles of moral theory and showing that they are normative for rational agents. Kant aspires to nothing less than this: to lay bare the fundamental principle of morality and show that it applies to us.
The Metaphysics of Morals is a work of political and moral philosophy by Immanuel Kant.
The work is divided into two main parts, "The Science of Right, which deals with the rights that people have or can acquire, and the Doctrine of Virtue, which deals with the virtues they ought to acquire."
The Critique of Practical Reason is the second of Immanuel Kant's three critiques and deals with his moral philosophy.
Immanuel Kant (1724-1804) was a German philosopher, who, according to the Stanford Encyclopedia of Philosophy is "the central figure of modern philosophy." Kant argued that fundamental concepts of the human mind structure human experience, that reason is the source of morality, that aesthetics arises from a faculty of disinterested judgment, that space and time are forms of our understanding, and that the world as it is "in-itself" is unknowable.
Contents:
Fundamental Principles of the Metaphysic of Morals
The Metaphysics of Morals
Philosophy of Law (The Science of Right)
The Metaphysical Elements of Ethics
The Critique of Practical Reason: Theory of Moral Reasoning
Perpetual Peace 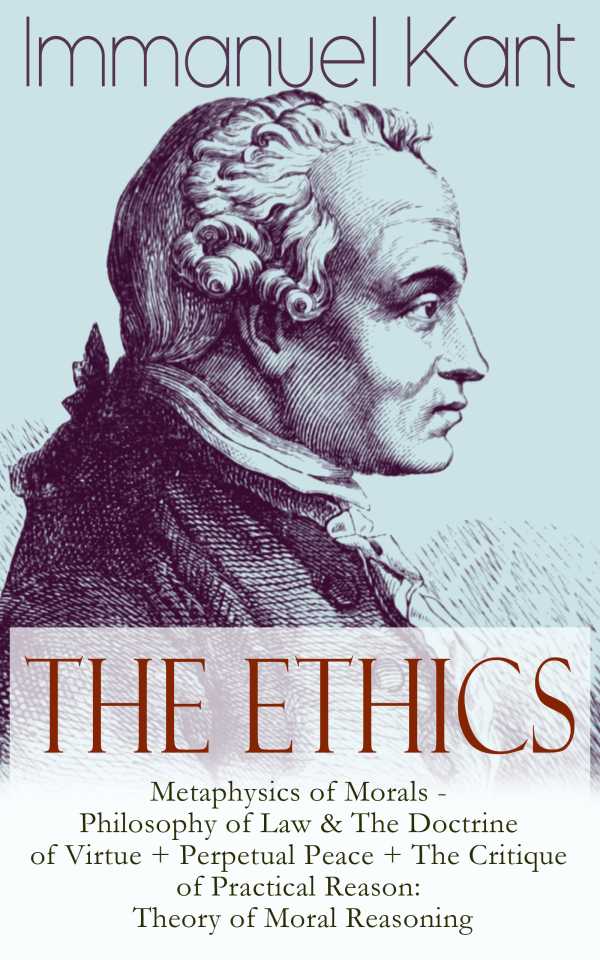 The Ethics of Immanuel Kant - Metaphysics of Morals - Philosophy of Law & The Doctrine of Virtue + Perpetual Peace + The Critique of Practical Reason: Theory of Moral Reasoning