This carefully crafted ebook: "THE ZULU TRILOGY ? Complete Allan Quatermain Series: Marie - An Episode in the Life of the Late Allan Quatermain + Child of Storm + Finished" is formatted for your eReader with a functional and detailed table of contents.
"Marie" reveals Allan Quatermain as a young man and involves his first marriage, to the Boer farm girl, Marie Marais. Their romance is opposed by Marie's anti-English father, and the villainous Pereira, who desires Marie. They are Voortrekkers who take part in the Great Trek whom Quatermain has to rescue. The novel describes Quatermain's involvement in the Sixth Xhosa War of 1835 and Weenen massacre. Real life people such as Piet Retief, Thomas Halstead, and the Zulu chief Dingane appear as characters.
"Child of Storm" is a novel set in 1854-56 and concerns Quatermain hunting in Zululand and getting involved with Mameema, a beautiful African girl who causes great turmoil in the Zulu kingdom. The novel is the second in a trilogy by Haggard involving the collapse of the Zulu kingdom and featuring the dwarf Zikali.
"Finished" is a the last novel in this trilogy about the Zulu kingdom. It is set against the background of the Anglo-Zulu War of 1879, covering events leading up to the war, and ending with the death of Cetewayo. Quatermain is depicted as being one of the few survivors of the Battle of Isandhlwana. Like others in the series, several real-life characters appear, such as Cetewayo and Anthony Durnford.
Sir Henry Rider Haggard (1856-1925) was an English writer of adventure novels set in exotic locations, predominantly Africa, and a pioneer of the Lost World literary genre. 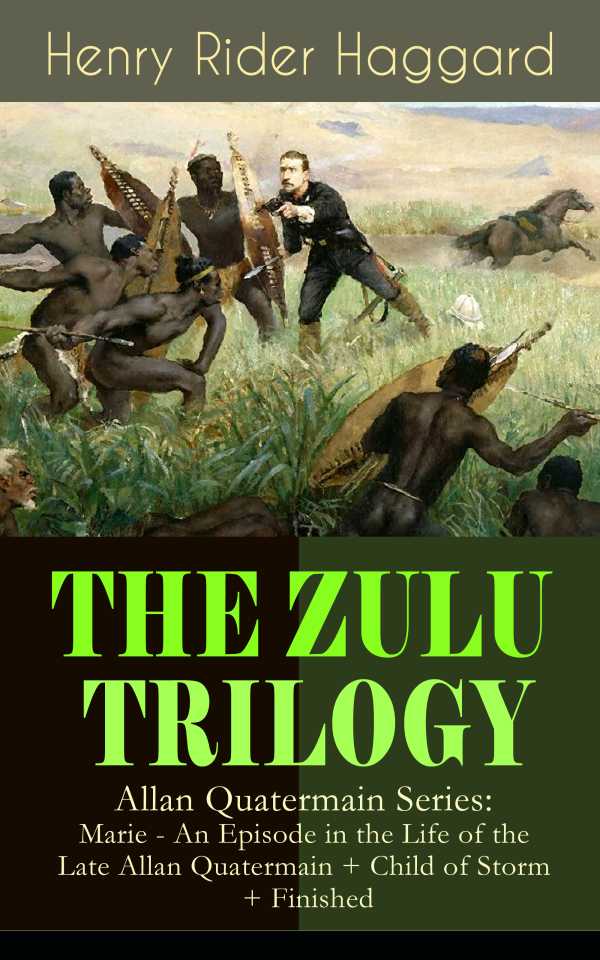